Who smokes in Ireland?

According to the Healthy Ireland Survey 2019

Tobacco is the leading global cause of preventable illness and death. Tobacco is the major cause of cancer. Smoking is the most harmful form of tobacco use, and causes the heaviest burden of tobacco-related illness.

In 2016, data from the Department of Health showed that every year, at least 5,500 people die from smoking-related diseases in Ireland.

One in every two smokers will die of a tobacco-related disease. These diseases include a wide range of cancers, as well as respiratory and cardiovascular diseases. Smokers are more likely to get cancer than non-smokers. This is particularly true of lung cancer, throat cancer and mouth cancer,

Tobacco was responsible for more than 100 million deaths worldwide in the 20th century. The World Health Organization has estimated that, if current trends continue, tobacco could cause a billion deaths in the 21st century.

According to a study carried out by the Department of Health, the healthcare costs of smoking related diseases to the Irish health services in 2013 was €466,000,000.

There are also significant productivity losses due to:

Smoking contributes to many cancers

Tobacco use is the leading cause of cancer – and it is avoidable. There is no safe way to use tobacco, and smoking is the most dangerous way to use tobacco. This is because the greatest cancer risk comes from the combustion of tobacco or tobacco smoke. Most toxic substances including carcinogens (cancer causing) are created during the burning process.

Tobacco causes different types of cancer, especially if smoked. Tobacco smoke also causes cancer in non-smokers who inhale tobacco smoke from smokers and can cause cancer in the children of parents who smoke.

The risk increases with:

Lung cancer is not the only result of smoking

Why is smoking so addictive?

Smoking is very addictive because tobacco contains nicotine, which is a powerful drug. Cigarettes are deliberately designed to give you a fast nicotine hit. It takes less than 20 seconds for the drug to reach your brain from inhaled cigarette smoke.

Nicotine causes addiction in much the same way as heroin or cocaine. It is just as addictive as these ‘harder’ drugs.

Most smokers want to quit 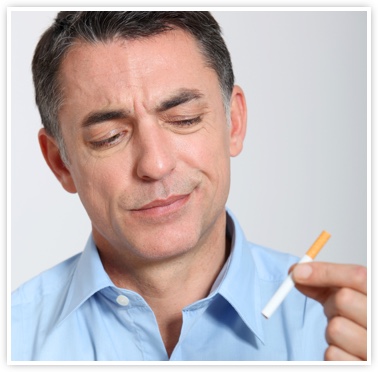 The addictive nature of nicotine is why most smokers say they want to quit but find it so difficult. If you start smoking, you may find it very hard to stop later on.

What parts of your body does smoking affect?

Chemicals in cigarette smoke enter our blood stream and can then affect the entire body. This is why smoking causes so many diseases, including:

How does smoking cause cancer?

The main way that smoking causes cancer is by damaging our DNA, including key genes that protect us against cancer.

Many of the chemicals found in cigarettes have been shown to cause DNA damage, including benzene, polonium-210, benzo(a)pyrene and nitrosamines.

This is already bad news, but it’s made worse by other chemicals in cigarettes. For example, chromium makes poisons like benzo(a)pyrene stick more strongly to DNA, increasing the chances of serious damage.

And chemicals like arsenic and nickel interfere with pathways for repairing damaged DNA. This makes it even more likely that damaged cells will eventually turn cancerous.

How long does it take for smoking to cause cancer?

It usually takes many years, or decades, for the DNA damage from smoking to cause cancer. Our bodies are designed to deal with a bit of damage, but it’s hard for the body to cope with the number of harmful chemicals in tobacco smoke.

Each cigarette can damage DNA in many lung cells, but it is the build-up of damage in the same cell that can lead to cancer. However, research shows that for every 15 cigarettes smoked there is a DNA change which could cause a cell to become cancerous. This is why it’s better to give up smoking sooner rather than later.

How does smoking weaken the body’s defences?

Smokers are also less able to handle toxic chemicals than those with healthy lungs and blood.

We all have special ‘cleaner’ proteins called ‘detoxification enzymes’ that mop up harmful chemicals and convert them into harmless ones. But the chemicals in smoke, such as cadmium, can overwhelm these cleaners.

Other chemicals like formaldehyde and acrolein kill cilia, the small hairs that clean toxins from your airways.

Cigarette smoke also impacts the immune system – increasing the number of cells which can encourage tumour growth in the lungs and suppressing the ones that kill cancer cells.