Below, the Keating family share the story of their mother, Marie. 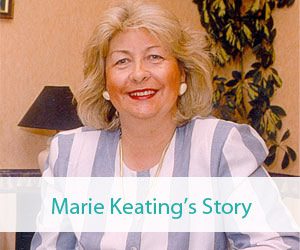 ‘“Cancer” had always been that word you don’t mention. It was referred to as the “Big C” and you always thought, “This is it, I am going to die.”’ – Marie Keating

Our Mam, Marie, was diagnosed with breast cancer on Wednesday, 25th September 1996. Her world and our world fell apart that day.

Two years previously, Marie had been diagnosed with what her doctor had called mastitis, a condition that causes inflammation and pain in the breast tissue. She had been told to take antibiotics and, if the symptoms did not go away, to come back. But Marie was Marie and had such a fear of hospitals and doctors that she had given birth to four of her five children at home. Her symptoms did not go away but she did not go back to the doctor until it was too late. By then she had a very large breast lump and her doctor immediately sent her to Beaumont Hospital for a biopsy. Because her case had become so advanced, the doctor there told her, ‘Marie, I don’t even have to do a biopsy to know that this is cancer, but we will’.

Marie was indeed diagnosed with breast cancer, and on October 1st 1996, underwent a full mastectomy. She started chemotherapy a few weeks later. Marie was very positive as were all her family, even though she was quite sick from the side effects of her treatment. She lost her hair but, having been a hair dresser, she had great fun cutting and styling wigs, even dying them (although you’re not supposed to).

In September 1997, Marie was given the ‘all clear’. What an amazing day that was for her and for all of us. She went straight to the nurses on the day ward where she had spent so many months to give them the great news and thank them for all their support and love through her treatment. However, Marie rarely did her exercises following her treatment and so developed lymphedema, an abnormal build-up of fluid that causes swelling in the limbs. She walked the floors at night with the pain, trying not to wake any of her family, just suffering in silence.

By October 1997, Marie started to have back pain and she returned to the hospital once more. Her doctor did an MRI and the results showed that she had three spots of cancer on her spine. Despite this awful news, she tried to stay positive, even throughout further radiotherapy treatment. Marie finished her radiotherapy in January 1998. However, unfortunately the treatment was not successful and Marie lost her very brave battle to breast cancer on 2nd February 1998, aged just 51.

The type of breast cancer that Marie died from is called Paget’s Disease, which is a decaying nipple that can be followed by a malignant tumour, causing breast cancer. The saddest thing for us to accept is that this is the most curable form of the disease. All of us, her five children and our Dad, were absolutely devastated. We didn’t know what we were going to do without our amazing mother, wife, friend, counsellor, and confidante. We were determined to do something to prevent other families from going through what we went through. This is why the Marie Keating Foundation was founded.

Marie Keating died because she did not know enough about cancer and the importance of early detection. If Marie had understood her symptoms and if she had been treated earlier she would be alive today.

If you have any concerns about cancer, please see your GP immediately.

What Marie's Foundation has been able to accomplish 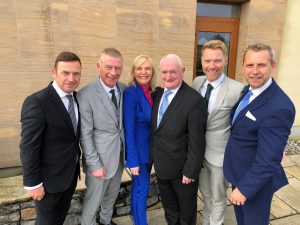 After losing their mother, the Keating family promised that they would do everything they could to bring an end to cancer. Originally set up to raise information and awareness about breast cancer, today, the Marie Keating Foundation provides information on all types of cancer and helps both men and women  detect it at earliest stages and supports them through cancer diagnosis, treatment and survivorship.

The Foundation offers national awareness and education programmes covering the most common cancers affecting people in Ireland, including bowel, breast, lung, prostate and skin cancer. The Marie Keating Foundation’s nurses have talked to over 260,000 people about the causes and risk factors of cancer.  Through its Comfort Fund, the Marie Keating Foundation provides financial assistance to people who are receiving treatment for any kind of cancer and who find themselves in financial difficulty as a result. In 2019 alone, over 660 families received assistance from the Comfort Fund.

The Marie Keating Foundation supports cancer survivors through its Survive & Thrive programmes, which are run nationwide, free of charge, for men and women who have completed their cancer treatment. Over 1,100 cancer survivors have attended courses and seminars since its inception in 2014.

Moving forward, the Foundation hopes to continue to support those diagnosed with cancer at every step of their cancer journey, while also reaching a wider community than ever before. Our goal is to spread the message of the importance of early detection and cancer prevention to at-risk communities, as well as the general public in line with our mission to make cancer less frightening by enlightening.

The below video explains the impact their mothers death had on the Keating family and what the Foundation has been able to accomplish over the last 20 years.

We hope you found this information useful. The Marie Keating Foundation offers all of our services for free. Help support people at every step of a cancer journey by making a donation today.