Miriam is no ordinary Nana. She has bright red hair (for now!), piercings and tattoos. But it’s Miriam’s quiet determination and sense of humour that really makes her stand out.  She is a mother of three girls and grandmother to three grandchildren, a hairdresser, participant in the ‘Dip in the Nip’ and member of the Sea of Change Choir. She is also a lung cancer survivor, and this is her story.

Originally from Walkinstown in Dublin, Miriam (52) now lives in Clane in Kildare but as she laughs is “still regarded as a blow-in” by the locals despite living in the village for years. Her lung cancer journey is by no means a standard one, with her diagnosis happening almost by accident.

At the age of 38 Miriam was diagnosed with epilepsy, after numerous tests and changing medication she returned home after surgery in November 2014 and life returned to relative normalcy. In November 2015 Miriam had a throbbing pain in the side of face, which she thought might be a tooth ache or infection. After attending her GP, who advised this was not the case, she was urged to go to hospital to get checked out. Miriam decided to go to her local hospital Naas General instead of into Beaumont where she was usually treated for her epilepsy. This decision possibly saved Miriam’s life.

After presenting at A&E she was admitted and the doctors in Naas worked with her specialists in Beaumont to get this Epileptic episode under control. After a few days, Miriam felt better and was keen to leave. During the time she was in hospital, one of the doctors took the opportunity to give her a full MOT and had done a chest x-ray. Miriam received the news that they could see a ‘shadow’ and was advised that it needed to be investigated further. 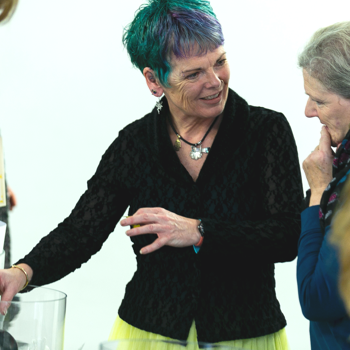 Within weeks she was in Tallaght for a biopsy and tests. She remembers clearly walking around Catherine’s Park in Lucan in the rain when she got a call to ask her to come into the hospital for her results. Not wanting to wait and knowing that something was amiss, Miriam asked to be told the result. She says that even when she heard the words “it’s cancer” it didn’t really sink in. She went back to her brother’s house and says, “it was much harder telling my brother then hearing it myself, saying it out loud made it real”.

She was referred to James’ and says, “even though I knew I thought just maybe they had made a mistake”. But this wasn’t to be, and she was told by her surgeon that he would take as much of it as was needed but as little as he could. The operation left Miriam with just half a lobe left in her right lung.

Miriam was told after the operation that she was ‘lucky’ to have caught the cancer when she did as it was fast growing and potentially by the time, she had experienced symptoms it may have been too late. She says, “after being through brain surgery I thought I’d be grand but I couldn’t get over how hard it was to get over the lung surgery”.  On damp or cold days, she notices that she can get breathless and has to take it a little easier. She is very aware of how lucky she is and is so grateful to be here and well for her grandchildren.

For Miriam one of the lasting negative effects of her lung cancer journey is a feeling that other people judge her for it. “I sometimes feel like I have to apologise as the first thing I get asked is if I smoke or smoked. The judgement and stigma is awful”.

However, one of the positives has definitely been getting involved in the Sea of Change Choir, a choir made up of caner survivors and supporters. “It came along when I needed it most. I can be totally myself”. The experience of being in the choir, such as appearing on Ireland’s Got Talent, has been transformative for Miriam and she is so grateful for the time she has been given to be a part of it.

“Getting diagnosed early, means I am here for my kids and grandchildren and also to really experience life, like being involved in this choir. My memento jar tells the story of my time in the choir and the positive impact it has had on my life. Time is so precious and is something I will forever be grateful for”.

Since her original diagnosis, Miriam had been attending annual check ups and scans to stay on top of her health.

In September 2020, on the run up to her 5-year scan, Miriam’s doctor noticed a small tumour in her lung. Due to the size of the tumour, Miriam was given the option to monitor her scans to ensure her tumour, which she named Johnny Depp, wasn’t growing. Every three months, Miriam attended her appointments and all her results were coming back as good news.

After several months of monitoring, just before Christmas 2020, it was discovered that Miriam’s tumour had started to grow. Having been presented with a couple of different treatment options, she then decided that to ensure her cancer was removed, she would opt for surgical intervention. On the 15th June 2021, Miriam once again underwent surgery to remove her lung cancer.

During surgery, Miriam’s doctor realised that more of her lung would need to be removed than was originally anticipated. However as a result, her medical team were confident that all the cancer had been removed.

Miriam’s steely determination served her well once again, as within two weeks of surgery, Miriam was back on the exercise bike and walking around the hospital ward.

‘I think my initial response was anger rather than fear. I just couldn’t believe it was happening to me AGAIN ,but I was determined to fight this thing and to keep going. It wasn’t and isn’t going to get me.’ Miriam explains.

Six years on from her original diagnosis, Miriam now has only one lobe of her lung remaining but is as positive as ever.

Miriam now walks every day and is doing her best to live her life as normally as possible. She has noticed that while out on her walks or singing with the Sea of Change Choir, she may experience some pain but her attitude is “what can you. I sound like Darth Vader when I’m out on my walks but I’m still out there.”

Miriam struggled to tell people that she had a recurrence of lung cancer as she says “I didn’t want to be judged all over again.”

Her condition has changed and lung cancer will always be a part of her life, but due to early detection, lung cancer doesn’t need to mean the end of her life.

“There is so much more to me than lung cancer. I don’t want to be defined by the word ‘cancer’ because its not who I am. If people were to see me, or look in my back garden and see bikes hanging out of my shed, they’d know I’m not just the hairdresser who had cancer. I’m Miriam, and I had lung cancer. But that isn’t all I am.”

To learn more about The Big Check Up, click here.