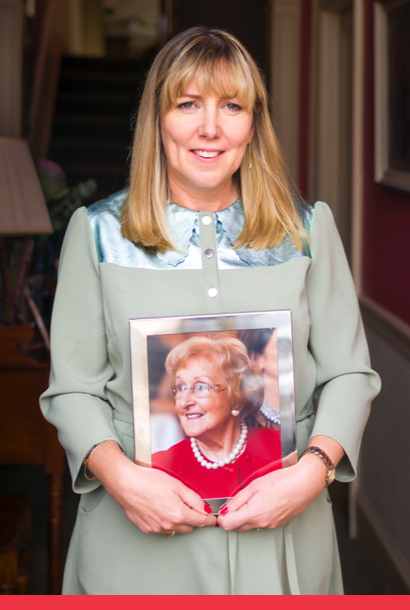 Catherine’s mum, Kathleen, passed away from lung cancer at the age of 81 on the 5th May 2017, having never smoked a day in her life. As part of a very close-knit family, the loss of Kathleen has left a huge hole in Catherine’s life and she misses her every day. Despite being 81 when she died Kathleen was always well and very rarely sick, so her death was a shock to her family.

Katheleen’s lung cancer journey began in April 2013 while on a trip to Paris, visiting with her son who was running in his first marathon. They noticed her breathing was laboured and she was tired. They took immediate action and brought Kathleen to hospital in Paris and she was diagnosed with pneumonia. When she returned home, she underwent numerous tests and scans and in July of that year was diagnosed with lung cancer. In the August she underwent an operation to remove the lower lobe of her right lung. Despite this Catherine described her as someone who was ‘flying around and always looking after everyone else’. She didn’t have chemotherapy or radiation therapy but did see her respiratory specialist regularly over the coming months and years.

At Christmas 2016, Catherine called over to see her mum, as her brother was home from abroad. Kathleen was in bed and when Catherine called up the family noticed she was very hot, was perspiring and her breathing was laboured. They called an ambulance and she was taken to A&E where she was diagnosed with pneumonia again. She stayed in hospital until Christmas Eve. She returned in the New Year for scans and in February a scan showed the pneumonia had shrunk. In March they did a biopsy and Catherine was with her mum when she received the results. They said she had ‘abnormal’ cells. Catherine tried to paint a positive picture for her mum’s sake but Kathleen “turned around and said to me, they’ve just told me I have cancer”.

In April she met with her oncologist Dr Janice Walshe and was told she had stage 4 terminal lung cancer. Her family stayed at St Vincent’s Hospital while her mother was admitted, and she describes the care and professionalism of the nurses as amazing. On the day her mother passed away, Catherin, her siblings and her father were gathered in Kathleen’s room holding a vigil and keeping her company until Kathleen passed away peacefully.

One of Kathleen’s famous family sayings was to ask at family gatherings “Sure when will we all be together again” and the family would all reply “next week!”.

Catherine says it’s hard to accept that this is not the case now but remembers her mother’s lust for life and these memories with great love and fondness.