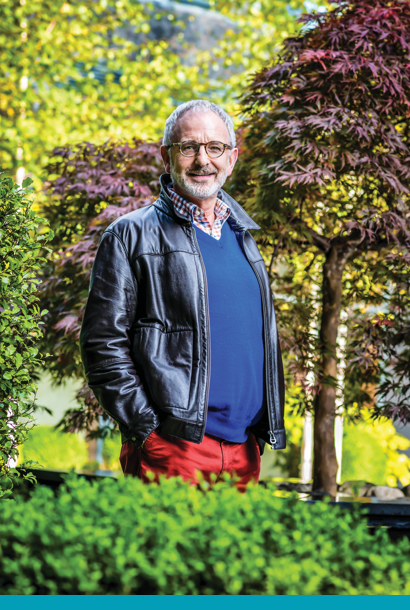 Michael is a former RTE newscaster, an author and a psychoanalyst. He was diagnosed with prostate cancer in 2007 after having a regular blood test. He chose to have a radical prostatectomy. In 2009, he had a sling procedure to address incontinence issues.

I’d been going for an annual MOT and getting a PSA blood test was part of that. In 2007, my PSA levels came back as high. My doctor diagnosed prostate cancer, and he outlined three possible treatment options. I chose surgery to remove the ticking bomb. I was very shocked by the diagnosis.

I was in hospital for a fortnight, because it was just on the cusp of widespread robotic surgery, whereas nowadays you can expect to be out in two to three days. Things have certainly moved on in terms of treatment.

Believing I wasn’t going to recover, and needing to write down the story of my life, after surgery I picked up the laptop and never looked back. It kick-started a whole new career of being an author, and I’ve four books now under my belt, with two new books to be published shortly. The first book I wrote At Five in the Afternoon dealt with my experience of being diagnosed with prostate cancer, and to my knowledge I was the first man in Ireland to talk openly about the disease on radio and television, and to write about it. There’s been a lot written about breast cancer even though prostate cancer is more common. Men tended not to talk about it. Hopefully that’s now beginning to change.

I was out of work for three months, and unfortunately I was one of that small percentage of men for whom incontinence was a continuing problem. I had a dreadful year and a half until they did the sling procedure, and since then, I’m almost totally continent. My partner Terry kept me going: whatever I was feeling at any time of the day or night, he told me to talk to him about it. His unyielding hope brought me through the dark days.

Prostate cancer is a disease that’s now eminently curable. In my case, it gave me a whole new writing career. I even wrote a show that was performed all over Ireland and in the USA with my RTE colleagues, and we got a “recommended” from the New York Times! None of that adventure would have happened without cancer. I was able to turn it into a positive, and I’d urge every man to do that. Live life creatively and to the full, enjoying every moment. The cancer experience has increased my gratitude for each extra day that I’m above ground.