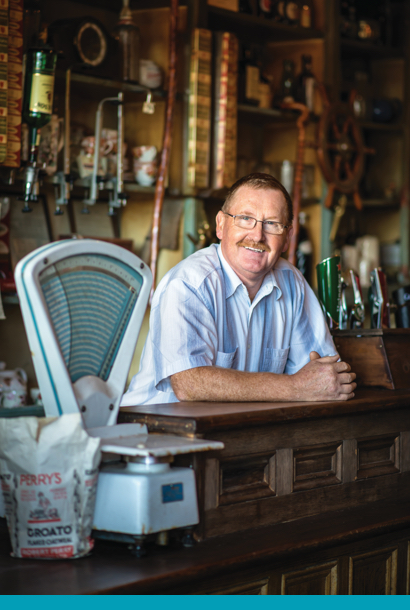 Michael was diagnosed with prostate cancer in 2009. He had a radical prostatectomy in September of that year. In 2014 he was given the all-clear. Together with his wife Jacqueline, their son Seamus and a group of like-minded friends they established the East Galway and Midlands Support Group.

Everyone talks about the two side effects of erectile dysfunction and incontinence but I was still totally unaware of what was waiting for me. To have a nappy put on me and to have absolutely no control, that was the worst day of it all.

I was off work for nearly 11 months. I drive a truck and we collect and deliver steel for a galvanising company. It’s heavy work, and my surgeon wouldn’t let me return. I nearly cracked up and I could have probably done with some more time off but I was itching to get back. My company kept my job open, and this was during the tough times, so I was very lucky.

Two major side effects of cancer treatment that people don’t discuss, however, are the financial impact, and depression, which I had a dreadful time with. I have started talking openly about it, and more people are opening up to say they had the same problems. What I have found from attending the support group is that men will open up about it if they are in the right forum. I would be quite shy and I can’t believe that I am now able to talk about the kind of things I talk about.

My son Seamus was the catalyst for the support group. He decided to organise a head shave and leg wax. This was during the recession so we thought we might only raise a few hundred euro – I didn’t mind at all, as I felt it was more about raising awareness. In fact, we raised over €3,500, which was a staggering amount of money. With my urologist, we made an information DVD with the money and we have since made another one.

My wife and my son were a massive support, particularly my wife. Talking to your partner is key because the side effects also affect them. What I have learned is that you really find out who your friends are. There are people you may not have thought you were that good friends with, but they were the ones who would give you a call to see how you were doing.

There are so many little milestones along the way as you heal and improve. Being given the all-clear two years ago was a massive one. You go from having to be seen every three months, to every six months, to a year and then to be told you don’t have come back again, it is a massive relief.

I would tell anyone that is about to go through a cancer journey that there is help out there, and you are not alone.  Look for a support centre in whatever area you live in.