Matt Cooper is known for being the straight talking, tell it like it is journalist, both on screen and on the airwaves. And he takes the same matter of fact approach when it comes to his health.

Having watched his father, a quiet and reserved man battle emphysema and later develop issues with his prostate, Matt thought that illness and being conscious of your health was something you only needed to do when you reached a certain age. 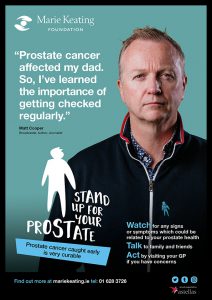 But as the years crept in, Matt who admitted himself “that I like to believe that I am still young” started to notice small things changing in his body. He found that he was

tired more, and that he was going to the bathroom a lot more frequently. Matt kept a good diet and exercise routine, and was the picture of health when he saw these changes start to trickle in. However, having no point of reference when it came to his family’s medical history things became a little bit more difficult for Matt.

His father was nearly 50 when Matt was born. Matt’s father passed away almost 20 years ago in 2000, and all of his father’s brothers and sisters had passed away long before that. So, when Matt went to his GP about some of his own health concerns and was asked about his family’s medical history, he had to admit that “I had no clue’.

One of the reasons Matt wanted to get involved in the Stand Up For Your Prostate campaign was to get men talking.

Matt’s father developed prostate issues towards the end of his life and his mother had breast cancer. Knowing what little he did of his family history, Matt recognised he was two and a half times more likely to develop prostate cancer and decided to go to his GP and get himself sorted.

He admits that men aren’t great about talking about things that make them uncomfortable. Things like how they are feeling, or their health are almost taboo subjects in certain circles. But having seen his wife, and other women in his life be so open about her health, and willing to learn more and get tested if they noticed any issue, Matt

was spurred on to do the same. Something he encourages all men to do.

Matt had his PSA tested and had a physical examination as well. According to Matt, the physical exam is what all men feel uncomfortable about, and while he admits that “it isn’t exactly fun”, it was nowhere near as bad as he had expected it to be. Thankfully, due to Matt being aware of his own body, and its changes, he was able to get tested and cleared of any prostate issues.

Matt “manned up” and got tested when he felt there was an issue, and now he has piece of mind, and the knowledge he needs to take control of his health. Getting tested for Matt meant that he is  now able to “live the rest of [his] life to the fullest of [his] potential”.

This year, over 3,550 men in Ireland will be diagnosed with prostate cancer. The good news is that is it very treatable when caught early. So be like Matt. Be open about any health issues that are bothering you and don’t hesitate to get yourself checked.