Senator Neale Richmond and his brother, schoolteacher Graham, are no strangers to cancer.

Their uncle Kenneth was also diagnosed with prostate cancer in 2006, a cancer that took the men’s grandfather thirty years previous. 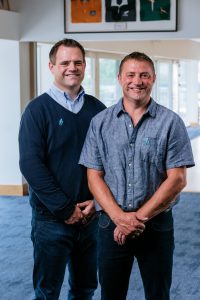 Their grandfather was a farmer from rural Ireland. He didn’t drink, didn’t smoke and worked the land in a time where there wasn’t much in the way of mechanical help so he was physically fit. He didn’t fit the description of someone you would think could get prostate cancer, but he did and ultimately, it was the reason for his untimely passing.

Growing up in Rathfarnham, the Richmond family never really talked about their health, but after losing both of their parents to cancer, both men and their sisters are now vigilant and understand the importance of being aware of your own body and staying on top of their health. Men are far less likely to talk to each other about their health and

how they are feeling, and this is something that Neale believes need to change.

Graham and Neale are very close and speak to each other on the phone every day, but before being asked to be a part of the Marie Keating’s Stand Up For Your Prostate campaign, the two never actually sat down and talked to each other about their health, or the fact that due to their family history of prostate, and breast cancer, that they were at an increased risk.

Neale says “We as men really aren’t good at talking to each other. We need to reach out and just check in with our family and pals and say “hey, have you got yourself checked recently? It doesn’t have to be the subject of every conversation you have after a match or in the pub but it is important to talk about. We’re happy enough to send our cars in for servicing, but when it comes to getting ourselves checked, we far more reluctant”.

Due to the lack of awareness around prostate cancer, Neale and Graham both lost out on time with their grandfather. And they don’t want this to happen to anyone else.

“Prostate cancer, when caught early is so so curable. It’s just a matter of getting yourself checked” says Graham. Neale believes that there are a lot of myths and false information around testing for prostate cancer, and that if men spoke about it more to each other that it would take the stigma and fear out of getting tested.

“People seem to think that in the case of prostate cancer, the treatment is worse than the cure and that’s just not the case. Just the sheer nature of the tests, its 15 minutes, its half an hour, the sooner you do it the less you have to worry about and I don’t think men know that.” Neale says.

The fact is, if your brother, father or uncle has been diagnosed with prostate cancer, you are two and a half times more likely to get the disease. A fact that Graham and Neale are now acutely aware of.

Graham never used to go to the doctor. He used to wear that fact “almost as a badge of honour” that he had to reintroduce himself to his GP whenever he went to the doctors with his wife. But after seeing how their uncle Kenneth is able to live such an active and healthy life after overcoming prostate cancer 15 years ago, Graham now realises that his attitude was misguided.

Kenneth was aware of his health having seen his brother-in-law die of cancer a few months previous and so he caught his symptoms early, and so was able to seek treatment and made a full recovery. This is the message that Neale and Graham want to reach the men of Ireland.

“It’s simply just being aware. You don’t have to focus on it twenty four hours a day… you need to be more aware if you are a certain age, if you’ve had a family member that has had cancer you’re more prone so you need to be more proactive in looking after your health. If you are getting up three and four times in the night to go to the loo, go and get yourself checked, you can’t just say it’s a part of getting older, because it might not be. Men have to realise that going to your doctor and getting checks when you reach that stage in your life has to become the new normal” says Graham.