Tom celebrated his 75th birthday this year. As he says himself “at 75 I haven’t done too bad” and with a 50th anniversary coming up, four children and seven grandchildren, it would be hard to disagree. But life has had its ups and downs too, with a quadruple bypass in 2001 and more recently the news that Tom has lung cancer.

Tom considered himself relatively fit, a keen gardener, golfer and pitch and putter, he also walked 7-8 miles a day once he retired from Dublin Bus. His bypass certainly made him think about his health and he gave up smoking cigarettes but as he admits himself, he still liked to have the odd cigar, particularly when he was on holidays in Spain. 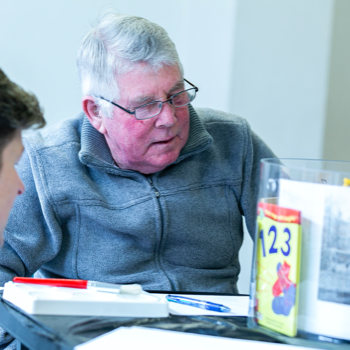 After a few rounds of anti-biotics and recurrent colds/flu like symptoms, Tom requested a chest x-ray and was sent to St Vincent’s Hospital. Tom never followed up on results and it was only a few months later that he asked about it and was told it had showed up an infection, which seemed to have cleared with anti-biotics. “I often wonder if that was the beginning of something more sinister. I’d advise anyone in similar circumstances to just make sure your happy with the results and sure it’d be no harm to get another x-ray done if you had any concerns”.

Tom first became concerned and noticed something was amiss when he felt breathless when he walked back up the garden to the house, something he would never have experienced before. As he was still under the care of a cardiologist, he went to see him assuming it was something to do with his heart. However, after a few tests including a treadmill test, which Tom had to stop as he was so out of breath, his cardiologist suggested a chest x-ray and referred him to Dr Emer Kelly, a respiratory specialist in St Vincent’s Hospital. In January 2019 Tom was called and asked to come in to see Dr Kelly, who gave him the news it was lung cancer. After more tests Tom was told that the cancer had spread into his upper back so the treatment suggested would be aggressive chemotherapy, which began in early May.

Tom found this tough going as he was in the chair for six or seven hours at a time. For the next few weeks he is on maintenance chemo until his next scan when all going well there will be positive results. He admits he found it hard to talk about and process his diagnosis at the time but now feels ready to talk about it and wants others to learn from his story.

Sitting in Tom’s living room as his daughter and two of his grandchildren arrive for their tea, birthday cards adorn the mantel and pictures of the family all over the walls, it is easy to see how much of a family man he is. Tom is waiting on a scan in the coming weeks which will tell him more about next steps for his treatment but he is hopeful that advances in treatment options and modern medicine will give him plenty more time to spend precious moments with his family – including a planned trip away at Christmas. He wants others to remember to ‘not smoke or quit, be kind to one another and always put your health first’.

Tom has always been into sports and being active. “I got my love of gardening from my Dad, he could grow anything and there wasn’t a patch let go spare”. He enjoyed playing football from schoolboy level all the way up. After an injury forced Tom to stop playing he took on coaching at schoolboy level, something he enjoyed with his wife Celine who helped with the kit and organisation. A little later, Tom took up golf and pitch and putt, which he still enjoys. The time he has spent and spends on these hobbies gives Tom such pleasure and the fact he can enjoy the time with his wife and friends on the pitch and putt course means a lot to him. “I decided to do my momento jar on these hobbies as they are so important to me and really keep me going and feeling like myself. I listen to my body and only do them when I have the energy but the time spent enjoying them really does wonders for my mental as well as my physical health. For me every moment matters especially when you are able to enjoy yourself, doing what you love with those you love, that’s what’s important.”