When Sasha speaks about her parents, Martin and Angela, they really come to life. It’s possible, through her stories and descriptions, to catch a glimpse of the kind of people they were, and it is clear how much Sasha loved them. Both originally from Ireland, Martin and Angela moved to the US before meeting and having their two daughters, Sasha and Aishling. In a cruel twist in this American tale, both of Sasha’s parents died of lung cancer, leaving her and her sister ‘at times overwhelmed by grief’.

Martin moved from Leitrim to the States when he was in his teens and served for a time in the US air force. Angela moved when she was in her early twenties from Tipperary to a rectory in Queens, ‘a typical Irish immigrant story of the time’ as Sasha puts it. They met and fell in love at a football game and the rest were history. They were married in Angela’s hometown of Ballina and went on to have Sasha in 1979 and Aishling in 1980. They grew up in New York City &  Connecticut but were fortunate to travel a lot as a family due to Martin’s job. 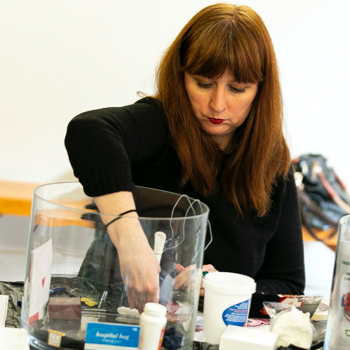 Sasha decided to come back to the family roots and came to Ireland for college but after that returned to the States to start her career. In 2009 she visited her Dad in London and just knew something was wrong. “He was such an active, vibrant person, it was easy to spot that he wasn’t himself” she says. She made her Dad visit the doctor and after multiple tests and scans they were told he had stage 4 lung cancer – Sasha recalls that her Dad “just didn’t want to hear the diagnosis”. She and her sister stayed with her Dad the whole time, helping to care and nurse him through the illness. They brought him back to Dublin in November 2009 to the Hospice in Harrold’s Cross. “He was a fighter, he just wanted to live. My parents were separated at this stage but my mom travelled from the States to be with us when we thought he was nearing the end. He surprised us all and lasted for a few months after my mom arrived, but she never left. Despite the hugely tragic nature of that time and the devastation we all felt, I will always remember that time and how precious it was to see my parents back together.  My mother really helped me get through the overwhelming period of grief after Dad died. His death impacted all our lives in so many ways.”

Sasha was back at work in Dublin when she got the news, that her Mum had been diagnosed with stage 4 lung cancer. Sasha immediately flew to the States and spent precious time with her mum in her final weeks. Angela passed away just six weeks after she was diagnosed.

“In the immediate weeks following her death I experienced an almost unconscious state of shock When it did come, the grief was paralysing. A mother is the very core of who you are, and everything felt different without her. The loss of your parents is the loss of unconditional love. Losing that is a monumental transition. I wanted to get involved in this campaign to try to raise awareness of lung cancer and its symptoms, I want people to learn from the lessons of both my parents, don’t ignore symptoms and go and get help if you have any concerns. My momento jar brings to life what might have been if we had more time...my jar is all about my daughter Winona who was born not long after my mother died and 7 years after my father passed. Every single day I wonder what life would have been like if we had more time and if they’d had the chance to meet their granddaughter. I imagined telling them her name and seeing them hold her. I always thought my children would know their grandparents. My memento jar is a wish for more time.”