“My dad passed away from lung cancer when he was 50 years old, and it happened within a matter of weeks. From the day he was diagnosed, I really don’t think the idea of him dying ever crossed his mind, until about two weeks before he died.”

Growing up in the States, Mallory being an only child spent a lot of time around adults.“By eight I was able to play every card game you could think of and I used to play chess a lot with my Dad.”

Richard spent his life trying to help others, and for years worked as a social worker and counsellor in a boy’s reform school in Arizona. Practical to a fault, every experience became a learning moment.

“It was never fun to play chess with my Dad. I remember when I was young, I would play with him, but he would always win. I have a memory of one day asking him why he never let me win. And his answer was ‘because you won’t learn anything if I let you win’. That was just the kind of man he was.” 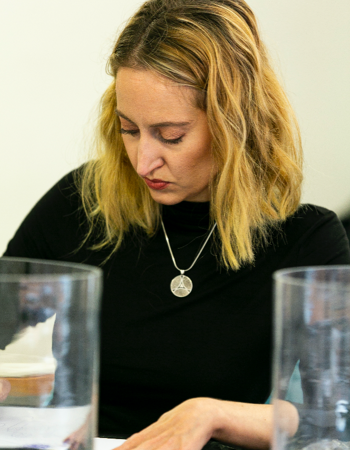 While working at the boy’s reform school, Richard discovered his love for horses. Growing up in the inner city of California, Richard wasn’t the stereotypical Californian. “Dad didn’t go hiking or drink green juice. He smoked all his life, but he went for his morning walk every day and took care of his horses so stayed relatively fit”.

Suffering with a chronic chest infection, Richard went to his doctor in March 2008 and was later diagnosed with stage four lung cancer. Six weeks later, he passed away.

“It all happened so fast. One day he was strong, and going to work, and the next he was gone. From the day he was told, he wanted to get chemo and radiation and do whatever it took to get better, but it became pretty clear that that wasn’t going to happen.”

“Because of Dad’s condition, he would get a lot of fluid in his lungs and that fluid stared to build up around his heart. He was in a huge amount of pain and the doctors that were treating him wouldn’t do surgery to drain the fluid because it was their opinion that he wouldn’t survive the surgery. Eventually the decision was made to go ahead with the procedure, and to everyone’s surprise he pulled through and lasted another week.”

After Richard’s surgery he regained consciousness and was able to be taken off the ventilator. He was flooded with people, both family, friends, colleagues and past pupil he had helped that came to say their goodbyes.

“While Dad was conscious, we had people out the door wanting to say goodbye and share their memories with him. For me and my Mom, it was the quiet times when Dad was unconscious or too tired to see anyone that we had our time. I never really got to say goodbye to him”.

Mallory’s Dad passed away later that week at the age of 50.

“I have been so luck that I was able to spend as much time with my father as I did. Thinking back on the moments we shared I couldn’t have asked for a better father. When I was 10, my parents decided to go on a trip to London for a week, which was a huge deal for them. I didn’t realise at the time that he was terrified of transatlantic flights, but ever the pragmatist, he wrote me a letter and gave it to my grandma in case anything happened to them. They came back safe and sound of course so the letter was left to gather dust”

Two years after Mallory’s father passed away, her grandfather was diagnosed with and early stage lung cancer. Due to the fact that his cancer was detected early, he was able to undergo chemotherapy and radiation, and was cleared of cancer.

During this time, Mallory’s grandmother was reviewing documents and came across Richard’s forgotten letter to his daughter.

“It was incredible. The letter was written to a ten-year-old me but is the most loving letter you could imagine. It’s like I have a little piece of my Dad with me and that’s something I will cherish forever.”

Having gone to college to be a dietitian, her fathers death put everything into perspective for Mallory. She decided to pursue her dream of travelling the world and became an actor, exploring all over Europe before settling in Ireland.

“My Dad has played such a huge role in my life, but he never got to see me act. He never got to see me live my dream and that’s a moment we can’t get back. If there is one thing, I want people to know it’s that things can change so quickly, so you have to take control while you can and be aware of the signs of lung cancer.”