Karen McDonnell is a busy mom and paediatric oncology nurse who knows only too well the importance of listening to your body and watching out for any changes that seem unusual to you. In 2010 Karen was given the staggering news that she had early stage lung cancer in her left lung. With her youngest daughter just six at the time and having never smoked, the news was so unexpected, Karen had originally convinced herself that the lung tumour must be a secondary. It came as an even bigger shock when in 2013 she was diagnosed with a second primary lung cancer tumour in the same lung.

Karen describes an ‘overwhelming feeling’ in March 2010 when she would wake up during the night knowing something was wrong in her chest. She describes feeling her ribs convincing herself she could feel a lump there. This continued for a few weeks before Karen eventually felt like she was ‘going out of her mind’. She began to experience a stabbing pain on her left side, which turned out to be unrelatec to her subsequent diagnosis), which went on all day. Feeling almost relieved to be experiencing something physical, Karen called her GP and made an appointment. 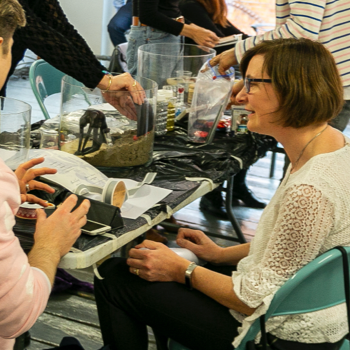 “My GP was brilliant, she really listened to me and immediately sent me to get a chest x-ray. Thankfully she did, she saved my life”. Karen got the x-ray done on her next day off and was told the results would be with her GP in five working days. “I never keep my phone on me at work but I did that Monday. As 5pm came I felt relief, one day down. But I was tidying up my things at about 5.45pm when the phone went. It was my GP who told me they had found something. I just wanted to know what we were going to do next. I wasn’t shocked when she rang me, I just knew. I just wanted to get this going, get everything done as soon as possible.”

Karen was referred to the rapid access clinic in St James’. It happened to be Easter Week so Karen had her scan done on Good Friday in Naas and then headed off to her home county of Mayo with her family for the Easter weekend. She brought her scan disk down with her and back up to Dublin on Tuesday when she was in to see Dr Finbarr O’Connell on Tuesday. He read the scan and was able to diagnose her then and there. Despite being a nurse herself, Karen said she didn’t realise that someone her age who had never smoked could get lung cancer. She was so convinced it couldn’t be a primary that she had spent the whole weekend steeling herself for the news that her cancer was advanced. When Dr O’Connell told her that her cancer was a primary that had been caught early and was curable with surgery, Karen said it was the best news, “I was delighted”.

Karen’s husband, Liam was with Karen but they had to tell their children now they had concrete information. Karen bought pizzas to celebrate her diagnosis as she knew how lucky she was to have been caught early. Karen says her children all received the news and the pizzas very differently! Her eldest daughter was cross and could not understand how her mum could be ‘celebrating’ this news with pizza, her son whose friend’s mum had recently gone through breast cancer and come out the other side, was concerned but supportive telling her she would be ok and the baby of the family, just six at the time, remembers knowing something was wrong but not fully understanding what was going on.

The next few weeks were a whirlwind with telling people, having scans and tests and then into James’s for the surgery. “It all went well thank god! But it was major surgery, Mr Young told us I wouldn’t be able to do anything for six weeks and I wasn’t. I went back to work after nine months which in hindsight was too soon.”

Karen recovered, went back to work and continued to live her busy, active life. Then, exactly 3 years on from her initial surgery, Karen was back in St. James’ having her second lung cancer surgery.

On New Year’s Eve 2013, Karen woke up with the overwhelming feeling that there was something wrong. “I had convinced myself again it was my brain. In the time between the two surgeries I had so much fear that it was coming back. Any pain or tweak, I was into the GP, paranoid that something was coming back. I had no lung symptoms related to my lungs, but over the Christmas I had lost weight and I hadn’t tried. It was unexplained and where people had put on weight and were giving out, I had the opposite issues.”

This constant anxiety prompted her to get in touch with Professor Ken O’Byrne, an oncology doctor. “He told me to come into the next clinic in James’s and I had an x-ray.” This time, the process seemed to move slower which was frustrating, and Karen felt that she had a lot more waiting to do. When it was confirmed that Karen had lung cancer for the second time, she had mixed emotions about her diagnosis.

“I remember being relieved but actually more upset then the first time. I remember thinking, I have dealt with this before I can do it again” but I was still scared”.

The wait continued until the scans came back making sure that the cancer had not spread from her lungs which was tough for Karen and her family.

On the 27th of April 2013, Karen’s second surgery removed the remainder of her left lung but this time, her recovery was easier than it had been the first time around.

“We expect a lot from ourselves and our bodies but this time I was determined to give myself the time I needed to get better. I took more time off work and that helped both physically and psychologically.”

“The anxiety has gone. Now I don’t worry so much. When I go for a follow up, I get some anxiety but nothing like the last time. I feel I would know now if something was wrong”

In 2014, Karen’s husband was diagnosed with prostate cancer at just 56. Liam’s diagnosis was caught early but his brother had died from prostate cancer that same year. This prompted him to get checked.

Karen and Liam’s story serves a reminder to us all on how curable cancer can be if caught early.

“I don’t want people to be paranoid, but it is important that people respond to their bodies and their instincts and go for regular check-ups. The longer you leave it the less possibility of a cure, the sooner you get there the better your chances. I wanted to give people a sense of hope. Cancer can be so negative and with lung cancer, survival rates are low. And I want to show people another side of lung cancer. I will be forever grateful to my GP, the radiology department in Naas, Dr O’Connell, Mr Young and his team and the oncology team in James’ for ensuring my early diagnosis and cure.”