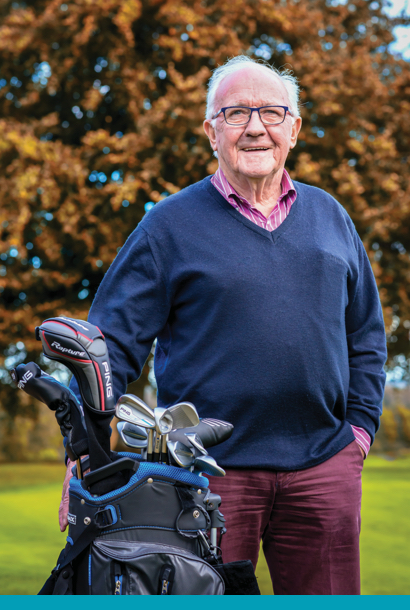 Rory was diagnosed with prostate cancer in November 2003 and had brachytherapy at the beginning of 2004. His wife died of breast cancer 22 years ago.

I found out my diagnosis on the way to a wedding, so I will never forget the date – or the couple’s anniversary. As regards my treatment, I was an ideal candidate for the brachytherapy. It was a bit uncomfortable – not in terms of pain, but there was a bit of preparation. It was very successful for me.

After the initial shock I never felt anything other than optimistic about it all. I treated the cancer like someone I was having a pint with that I didn’t like – I wanted to get rid of them. I genuinely never felt that it wouldn’t end well. I was well looked after and I felt lucky in that sense.

I hate the word remission – as far as I was concerned when I had my procedure that was it. Remission sounds like you are out on parole. If I ever got cancer again it would be a new cancer, not the old enemy returning. It can be hard mentally but that doesn’t last long when you realise you are on the way up again. I would say this to anyone – accept that you’ve got it but think about it as an unwelcome guest you’re going to ask to leave.

I am almost 80 but I eat well and do a bit of exercise such as walking the dog so I am feeling good. My brother is in Dubai so I go out there every January for a few weeks. I worked in the shoe business for many years and spent 25 years in London. Now one of my daughters imports shoes so I help her out a bit. I play a bit of golf too but Manchester City is my passion – I love sitting down to watch them.

My daughter had nagged me to get blood tests and to specifically include the PSA, so if I had left it longer perhaps the cancer would have been more aggressive. The important thing is for men to get tested. If you are over 50, ask your doctor for the PSA blood test – just get peace of mind. In a lot of cases your GP can put your mind at ease, or if there is a problem, they can treat it.