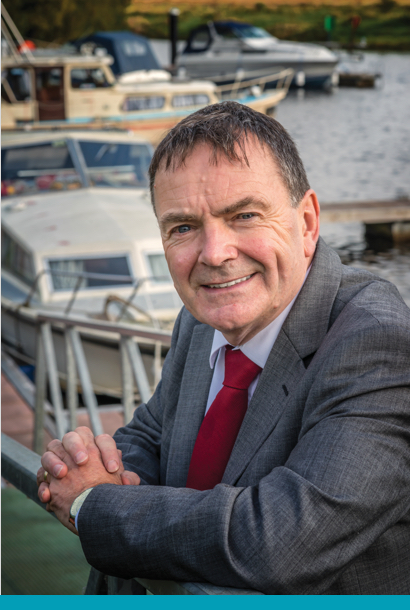 Gerry was diagnosed in September 2014 and had brachytherapy in early 2015. He is an insurance broker and was back in work four days after his procedure.

I got a bad chest infection and I am not great at going to the doctor but with the encouragement of my good wife I went down to have everything checked out. My PSA was up fractionally and after receiving advice from my urologist I decided to have a biopsy just in case.

When the result came in, I attended for my appointment expecting to hear, “Sorry for putting you through all that but it was best to be sure! “ Instead, he confirmed that I had cancer. Once he mentioned the word ‘cancer,’ I completely zoned out and couldn’t take anything in. It’s not a nice word but I realised I was extremely lucky as it was caught so early.

My wife is a pharmacist, but she is also an acupuncturist. She has been one of the therapists in the East Galway and Midlands Cancer Support Centre for over three years – I hadn’t realised I was going to be one of the people going through the doors. I did speak to some of the lads up there about my treatment options, and I did do some research but it was ultimately the urologist’s advice to have brachytherapy.

The first three months after having it done I was very tired. Physically it took a fair bit out of me initially. But I am self-employed so I had my procedure done on a Thursday and I was back in for a half day the following Monday. That was too soon really, the tiredness affects you in strange ways. I remember talking to a client and thank God I had written everything down because when he left I couldn’t remember anything that was said.

A few weeks ago I had a pain in my chest one day and ended up having to get to have a stent put in in one of my arteries. I had a major blockage . I caught that in time too so I consider myself a very lucky guy. I know I will be working for a good few more years but I have learned that there are more important things in life than work. There is the 5k run for the cancer support centre  coming up – I don’t think I have run since I was 16 or 17 but I have decided to do it and I am out training every evening. If you had asked me two or three years ago I would have told you I was too busy to do it, and besides that I wouldn’t have been able. But here I am.

What I would say to someone who has just receive a diagnosis is that they shouldn’t let the cancer define them – you are still you.