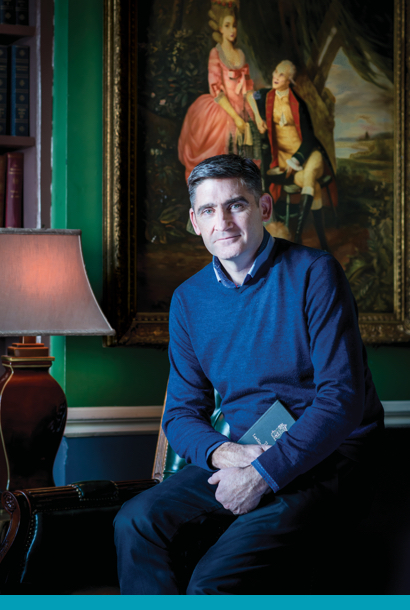 David was diagnosed with prostate cancer when he was only 44. With a young family, he feared the worst. Following robotic surgery, he made a full recovery and was given the all-clear in 2015.

Myself and my wife had just been to Peru in October 2012 to climb Machu Picchu as part of a fundraising trip for the National Children’s Hospital in Tallaght. When I returned, I had a touch of E.coli and I had to take some time off work as I work with people with disabilities. Blood tests eventually showed that I was clear of E.coli but had a high PSA. It kept rising so I had a biopsy done. I found that very difficult and it was probably the worst part of the whole experience.

We really thought it was just to rule it out but when it came back as cancer it was a massive shock. I would have regarded myself as someone who took care of themselves. I run and I coach youth soccer so I was reasonably fit. I really felt I wasn’t a candidate for prostate cancer – I associated it with men in their sixties and seventies. My kids were just 13, 10 and six at the time so it was a huge blow.

The robotic surgery was very straightforward, apart from a bit of an infection shortly after it. I felt lucky I didn’t have to go through chemotherapy or radiation. Certainly the issue of having sexual function problems was a major one at my age. I got a bit depressed but I went and spoke to someone about it and took some time out. I am now back at work and would tell other men who are diagnosed with prostate cancer to take heart because, while it will affect you, you can learn to live with the life changing side effects of this cancer.

Last year I was given the all-clear and it is such a massive relief to be finally told you are well. I sometimes still wonder why I got it but the most important thing was to deal with it head on and take the advice of the professionals. I realise now it isn’t the end of the world by any means – it changes things alright but the prognosis is very good nowadays. I am so appreciative of the support I got from my wife and kids, they were a huge support even though it was hard for them too. For us it is something that’s in the past now.