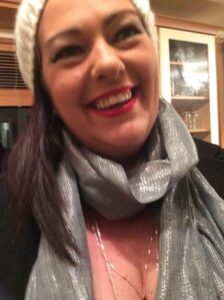 At 42, Arlette was a self-professed sun-worshipper.

“I always loved the sun” she explains. “ we were lucky enough to be able to go to Spain for holidays when I was a child and we would just be in the sun all day long.”

Having always had quite sallow skin, Arlette never dreamed that one day, she would be told that she had skin cancer, let alone melanoma.

“I do take responsibility for the fact that I probably didn’t protect my skin as much as I should have, and I did use sunbeds once or twice a year but I always believed that because I didn’t burn, that I was okay. My skin always took the sun really well!”

This would all change in November 2020.

One day in September, Arlette spotted a dark spot on her left arm just above her elbow. As soon as she saw it, she knew something wasn’t right.

“It was almost like the mole was glaring at me. I’m the first to admit that I don’t like to go to the doctors,  but something about this felt different. I’m a really bad worrier. I had a bad track record with doctors and hospitals when I was younger so I would usually just stick my head in the sand and hope that whatever was worrying me went away before I had to go to someone about it.”

After a little while, Arlette’s mole began to itch and she plucked up the courage to go and see her GP and he immediately wanted to remove it.

“He just told me straight out ‘I’m not happy with how that looks, I’m taking it off’ and I couldn’t really argue with him. Once he told me that he was going to send it off for a biopsy, that’s when I started to panic.”

A couple of days later, she got a call to visit the dermatology section in Tallaght hospital where she was told that her mole was in fact melanoma.

“I got the news the day before my birthday and of course, me being me, I was convinced that I was dead and buried, but thankfully, I received some of the most amazing care. Melanoma really doesn’t have to be a death sentence anymore.”

After some scans, she went in for surgery to excise more of where her mole had been and to check three of her lymph nodes to make sure her cancer hadn’t spread. After examination, Arlette was told that her melanoma had spread to one of her lymph nodes, meaning she would have to undergo more treatment.

“At the moment, I’m on my fourth treatment of immunotherapy and have eight more to go. I’m so grateful because even five years ago, this wouldn’t be an option. My cancer was caught early and as a result, I can work, spend time with my kids and my husband and live my life relatively normally. I won’t say that it hasn’t been a hard road, because it definitely has, not just for me, but for my family too, but I am so glad that I took that step and went to my GP”.

When asked what she wanted people to know about melanoma, here is what she said-

“I think as Irish people, and Irish Mammy’s in particular, we are really bad at looking after ourselves and putting ourselves first. It’s something we really need to get better at. I’m now paranoid about the sun and taking care of my skin, and tell everyone who will listen about putting on their factor 50 and covering up. Melanoma is something that will never leave me, but if I can help someone else avoid melanoma, or cope with a melanoma diagnosis by sharing my story, then it will have been worth it.”

For more infromation on the warning signs of melanoma and how you can reduce your risk, visit https://www.mariekeating.ie/cancer-information/skincancer/ today.