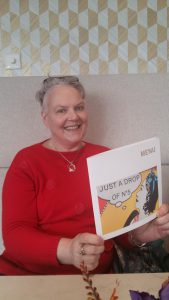 Deirdre has passed away since this post was published but we remember her every day as someone who lived her life the way she wanted to and contributed so richly to our Positive Living Group helping to support others living with stage 4 cancer.

Deirdre has a nursing background. She has a very supportive husband, two wonderful daughters and great friends and a family that allow her to be herself. As well as having all of these things, Deirdre is living with an advanced breast cancer diagnosis.

In 2014, after a routine mammogram, cancer was found in her right breast. She had no symptoms and no pain, but there it was. After three lumpectomies, several rounds of chemotherapy and radiation therapy treatments, in 2015 Deirdre was cleared.

Deirdre headed back to work and breathed a sigh of relief when her 2016 mammogram came back clear. So, when in 2017, a new type of breast cancer was found in her left breast, Deirdre was floored.

“Because of my background, I was well aware that over 30% of women that have had breast cancer experience recurrence, but when it happens to you, it is something you can’t imagine.”

After further tests in April 2017, Deirdre was told that the cancer had spread to both of her lungs.

“You think you’ll be able to cope, but being told you have metastatic cancer at 53 devastates you. I have a great support system in my family and friends but when you’re told that news, it really takes something out of you.”

Deirdre was upset sometimes to notice that she had not recovered in the way others with similar diagnoses had.

“You speak to people and they ask how you are, and you say what you have to say. You could be in having a cup of tea with friends or in the shops and I could be in an unexpected flood of tears. You’d have no idea what could trigger you. It was like I was no longer in control of my emotions.”

Telling the people around her was the first step Deirdre took to accept her illness.

“I was always open with my children and kept them in the loop. When the two girls were young (aged 9 and 10), I explained the situation in increments. I told them I wasn’t well one day, then a few days later I asked what they would think if I didn’t have hair anymore, and on and on, until they knew the full story.”

Now, cancer treatment is a part of Deirdre’s life. She brought her youngest daughter, her sister and sister-in-law to her final wig fitting the first time she lost her hair. Deirdre described it as “almost like going wedding dress shopping. It was fun and something we could do together”.  Now her girls are older, they sometimes come to chemo treatments with Deirdre.

“It’s not something I avoid talking about with people. People hear metastatic and they think you’ll drop dead, or they ask me when I’m going to finish treatment. I want people to know that I will be having treatment for the rest of my life and that other than this bloody disease, my life is amazing.”

When she was diagnosed with metastatic breast cancer, Deirdre got in touch with the Marie Keating Foundation and now attends their free monthly Positive Living meetings for the women diagnosed with this condition. These meetings are an invaluable source of support for Deirdre. She feels there is a lovely sense of community between the women. She has immense gratitude for Helen Forristal, who facilitates these groups, and those involved in the organisation. The meetings help Deirdre to cope with the “ups and downs” of having metastatic breast cancer.

“When life throws you lemons, make lemonade. It’s so important to live the life you have, and not sweat the small stuff. I’m living with cancer, but that doesn’t stop me from laughing with my family or my daughters giving out to me for not putting on my makeup right! You have to live for now and if people reading this were to learn anything from my story, it would be that it’s possible to live well, and live a happy life with metastatic cancer. It’s a scary thing, but I have found that it focuses me on the postitive aspects of life.”