Aine Murphy is a mother, wife and friend, who for that last two years has been living life with a metastatic breast cancer diagnosis. Now, Aine is feeling the best she has felt in a long time, and wants to let everyone know the reality of living life with an advanced stage cancer is and let other women in her position know that it is okay to seek support.

In February 2016, a few weeks before her daughter’s wedding, Aine felt a slight pinch, “like a hair getting caught in your clothes”, in her left breast while reaching up to 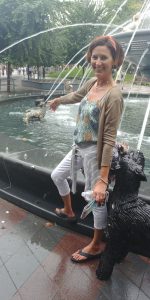 organise a shelf. She later found a small lump in the same spot where she had felt the pinch but wasn’t worried.

“I had had two cysts drained from my breast before, so when I found the lump, I wasn’t too worried about it. I decided I would let it get a bit bigger before I spoke to anyone about it and then to be honest, it completely went out of my head.”

In April, Aine went to her GP, who initially had trouble feeling the lump, and the cyst was drained. Further tests were done, revealing that Aine had developed Stage 2 breast cancer in her left breast.

“When I was told that, my mindset was ‘Okay, let’s get on with it.’ I wanted to get treatment straight away so I could get back to my life.”

Things moved quickly after that. Surgery was scheduled to remove the tumours for Aine’s breast, but this was later cancelled after the routine checks came back, showing Aine’s cancer had spread, and she was diagnosed with stage 4, incurable cancer.

It took a long time for Aine to realise that she had been diagnosed with secondary cancer. When the surgery was cancelled and she was told the cancer had made other deposits, it hadn’t registered with her that her treatment plan was changing or that she was sicker than originally thought.

It was while sitting in a waiting room in her Oncologists office, where she saw a poster for a secondary cancer support group that everything fell into place in Aine’s mind.

“I felt like my life had been taken over by this huge monster. Physically, I was being taken care of. My medical team were putting me on bone straighteners and medications to work on my cancer, but my mental health was suffering.”

Her diagnosis had taken over her life, and the stigma surrounding stage four cancer started to encroach on her ability to function.

“The first thing I thought of when I thought of stage four cancer was death. I imagined sick people, pale and visibly unwell and that terrified me. I didn’t want to see people that had what I had, looking like that. But then, that was all I knew.”

Feeling like she needed to be the pillar of support for her loved ones, also living with this diagnosis, Aine pushed her worries and anxieties aside, and “made herself cope”.

“I had no idea what I was doing. I had never met anyone with metastatic cancer. I didn’t know that the worry and anxiety I was feeling was normal because no one had ever told me it was. I felt like I had never heard of anyone that was struggling to cope with an advanced stage cancer because they were either having no issues, or they were dead. I was never told about any resources or outlets for me to share what I was feeling so I suffered on my own.”

For a year, Aine struggled with her cancer diagnosis alone. Becoming desperate, she psyched herself up and eventually reached out and found the Positive Living programme for women living with metastatic and advanced breast cancer diagnosis.

“Being able to see women, like me, living well with MBC opened my eyes. I wasn’t alone and since my first meeting, I haven’t looked back…What I really want people to know about metastatic cancer is that it’s not “terminal”. Our cancer is incurable. You can live a happy, healthy and God willing, long life with stage four cancer. And now two years in, I’m feeling the best I have in a while.”