Embargo: November 6th, 2018:  Shocking new research has been released today to mark the beginning of International Lung Cancer Awareness Month, which reveals that over a quarter (27%) of the Irish public believe that non-smokers who get lung cancer should have their treatment prioritised over those who smoke.

Today the Marie Keating Foundation launches its ‘I Am Lung Cancer’ campaign, which aims to challenge these negative perceptions around the disease and to humanise the disease by showcasing the range of people it affects. The campaign is being fronted by three ambassadors who have been affected by lung cancer. The campaign will include a radio advertisement, a video, updated website content and a social media campaign promotion of the key campaign messages.

Commenting on the campaign Liz Yeates CEO of the Marie Keating Foundation says “more people die from lung cancer every year than any other type of cancer. It kills more women than breast cancer, despite breast cancer cases far outnumbering those of lung and more men die from lung cancer then prostate or testicular cancer. Our ‘I Am Lung Cancer’ campaign aims to challenge the stereotypes so closely associated with the disease. Many people have an image of who they believe a lung cancer patient is, but this campaign illustrates the variety of people it can affect. We want to change the conversation and tone around lung cancer from one of judgement to one of empathy and support.”

She continues “we also want to follow on from last year’s campaign and spread awareness of the signs and symptoms of lung cancer. It is vital people are more aware, so they can recognise when they need to go and get checked. At the Foundation, we understand how important early detection is in the fight against cancer and we hope this campaign can play its part in helping to improve the survival rates for lung cancer.” 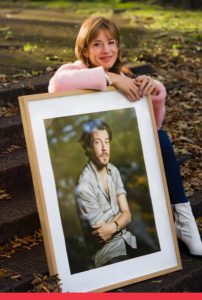 One of the campaigns ambassadors, broadcaster Venetia Quick who lost her husband Martin to lung cancer earlier this year speaks about how this stigma and judgement can feel ‘When you’re diagnosed with lung cancer, there’s always one person who’ll make ‘the face’ and make reference to ‘those bloody cigarettes’. When somebody is diagnosed with cancer, it’s a tragedy. No matter what cancer. We all make different lifestyle choices. Getting cancer isn’t one of them. When you’re looking after and caring for someone you love with lung cancer it is so difficult to hear those words of blame and judgement. We need to be less judgmental when somebody gets lung cancer. Nobody chooses to get cancer, and anybody can get it.’

The Marie Keating Foundation research also revealed a worrying lack of awareness when it comes to the symptoms of lung cancer. Less than one in five (16%) adults claim to be well informed when it comes to the signs and symptoms of lung cancer. This contrasts with almost a third (31%) who say they are well informed in relation to breast cancer and over a quarter (26%) in relation to skin cancer.

More than 2,500 cases of lung cancer are diagnosed annually in Ireland and the five-year survival rate is just 18%. This lack of symptom awareness means patients are often presenting late, not giving themselves the best chance of a good outcome. A perception that blame and judgement exists for those diagnosed can also make people reluctant to seek help.

Venetia Quick says catching lung cancer early and being aware of its symptoms can make a real difference “After love, time is the most precious commodity we have. Even if the diagnosis is not what you want to hear, getting checked early gives you time. Time to spend with those you love. Time, for another Christmas. Time, to say good bye.”

The ‘I Am Lung Cancer’ campaign is promoting the importance of being aware of lung cancer’s symptoms, which include:

Professor Ray McDermott, Consultant Medical Oncologist, works in St Vincent’s Hospital, Tallaght University Hospital and the Beacon Hospital, is urging anyone with these symptoms to seek help, “it is so crucial that if you have any of these symptoms to go and talk to your GP. It may be nothing but why take the chance and delay getting treatment if you need it. Presenting early gives everyone the best chance of successful treatment. Lung cancer incidence, survival and mortality rates are alarming in Ireland with more people dying from lung cancer every year than any other cancer type. Don’t let any fear of judgement stop you from getting the help you need and deserve.”

The ‘I Am Lung Cancer’ Lung Cancer Awareness campaign is brought to you by the Marie Keating Foundation with the kind support of MSD and Roche Products (Ireland) Limited. For further information go to www.mariekeating.ie