MKF beats fundraising target and raises almost €40,000 thanks to the ‘AM Fights Cancer’ appeal

Ireland AM’s week-long fundraising appeal in aid of the Marie Keating Foundation has almost doubled its target and raised a staggering €39,379.

‘AM Fights Cancer’ launched on Monday 23rd July and aimed to raise €20,000 to help the Foundation’s comfort fund service, which offer financial assistance to families struggling financially while a loved one is going through cancer treatment.

This service has seen a massive 338% increase in recent times and in last year alone, MKF gave out grants to more than 530 families around the country.

Each year, the Marie Keating Foundation allocates a specific budget for people who are undergoing cancer treatment and are struggling financially as a result. It accepts applications on behalf of men, women and children and has been operating successfully since 2004. The €39,379 will allow the Foundation to help up to 50 additional families this year. 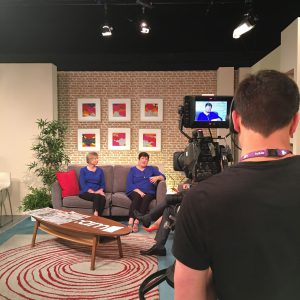 On Monday, Dublin mum Bernie Walsh spoke about her cancer journey and what it was like going through her treatment while having the additional burden of not being able to meet her mortgage repayments and bills. Liz Yeates, CEO of the Marie Keating Foundation spoke about the comfort fund and the help it has brought to families around the country who are in a similar position to Bernie.

During Wednesday’s show Melanoma survivor and Foundation Ambassador Tom Murphy spoke about his cancer journey and how his participation in a clinical trial saved his life. Dr Janice Walshe medical oncologist, highlighted how important it is to be SunSmart and the importance of early detection in any cancer diagnosis.

Breast cancer survivor Deirdre Morrissey joined Helen Forristal, Director of Nursing Services on the couch, to discuss the Foundation’s Survive & Thrive Programme and how beneficial it is to those moving forward after cancer treatment.

Some of the Foundation’s celebrity ambassadors also supported the campaign. Business women Norah Casey, who lost her husband Richard to the disease six years ago, spoke alongside long standing supporter Pippa O’ Connor, about the work of the Foundation.

Stan Boardman and soccer legends Steve Staunton and Ian Wright also spoke during the week about their support of the Foundation.

Our Patron and co-founder Ronan Keating and his wife Storm discussed why the Foundation was established 20 years ago and the tireless work of it’s staff and nurses.

Director of Fundraising Linda Keating said “We are so delighted and overwhelmed at the response we have had to the Ireland AM, ‘AM Fights Cancer’ appeal. They almost doubled their target by inspiring people to donate over €39,379. The money raised will have such a positive impact on our comfort fund this year. We have had a huge increase in the demand for this service in recent times and your donations will allow us to help an additional 50 families who are in financial difficulty as a result of a loved being diagnosed with cancer.” 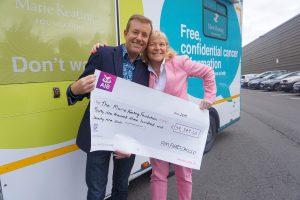 She continued “We cannot thank everyone who donated enough, it really was such an amazing response and we appreciate every single euro that was donated.  This would not have happened without the amazing work of the team at Ireland AM, they have been so generous with their time and commitment to the initiative and we can’t thank them enough. Ireland AM and the ‘AM Fights Cancer’ initiative have helped the Marie Keating Foundation to support so many families in need at a very difficult time.”

Ireland AM presenter Alan Hughes said “Our aim throughout our “AM FIGHTS CANCER” week was to raise €20,000 as well as creating awareness to our viewers. The response we received was incredible and this is shown in the final amount raised which was just over €39,000. Having lost a brother and sister to cancer, I only know too well how a death affects a family and with the resources the Marie Keating Foundation provide, it’s great to see how many families have availed of their services. Thanks again to everyone who donated to such a great cause.”

All the team at Marie Keating Foundation would like to say a huge thank you to everyone for donating and to all who supported this special fundraising appeal.