More people die from Lung Cancer in Ireland than any other type of Cancer. 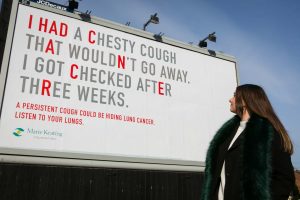 Dublin,  6th November,  2017: To coincide with International Lung Cancer Awareness Month, the Marie Keating Foundation has launched a ‘Listen To Your Lungs’ awareness campaign to alert people in Ireland about the risk of lung cancer if they have a persistent cough for more than three weeks. Approximately 2,300 Irish people are diagnosed with lung cancer every year. It is the fourth most common cancer in Ireland, after prostate, breast and colorectal, however more people die from lung cancer in Ireland than any other type of cancer.

To help combat the high levels of lung cancer in Ireland, the Marie Keating Foundation is launching a new ‘Listen To Your Lungs’ campaign which will include a radio advertisement, a video, updated website content, an outdoor advertising campaign and social media promotion of the key campaign messages. An innovative feature of the outdoor advertising campaign is a ‘coughing’ bill-board located at Macken Street in Dublin which should grab the attention of passers-by as they hear a coughing sound. This repeated coughing sound in combination with the poster image highlights in a novel way the message that a persistent cough could be a sign of lung cancer.

The Listen To Your Lung Campaign will encourage people to visit their Doctor if they have been suffering from a cough for three or more weeks, especially if this is combined with other symptoms such as breathlessness, fatigue or ongoing chest infections. The campaign also features an awareness video and radio ad with lung cancer survivor, Tony Walsh, which can be viewed on www.mariekeating.ie/lungcancer.

Tony Walsh was diagnosed with Lung Cancer in December, 2014, after he presented  to his Doctor with a persistent cough and chest infection. Tony Walsh, Lung Cancer survivor, said: “I am one of the lucky ones, I have come out the other side. I’ve had intensive treatment and my right lung was removed. It has been a long road to recovery and it could have been a very different story. I know how scary it is going to Doctor with these concerns, especially if you are a smoker. You never want to hear those words. But early detection is crucial and it could save your life. My lung cancer was caught early because I listened to my lungs.”

Dr. Anne Marie Baird, lung cancer researcher and patient advocate at St James Hospital and at Trinity College Dublin, says  “I am delighted to see a campaign being launched in Ireland during International Lung Cancer Awareness Month. Lung cancer incidence, survival and mortality rates are alarming in Ireland with more people dying from lung cancer every year than any other cancer type. The aim of this campaign is to educate people about a persistent cough and other symptoms associated with lung cancer, therefore encouraging people to get checked and hopefully detecting lung cancer at an earlier stage.”

Liz Yeates, CEO at the Marie Keating Foundations, said: “This is the first time the Marie Keating Foundation has hosted a multi-faceted awareness campaign about lung cancer, which is the biggest cancer killer worldwide, causing more deaths than breast and prostate cancer put together all over the world. This campaign will increase people’s awareness in Ireland of the crucial early signs – which are all too often overlooked as something minor. We ignore a lot of things in life, a persistent cough shouldn’t be one of them. A cough of three weeks or more could be innocent but it could be a sign of lung cancer, so we urge people to get seen by your GP. Listen to your lungs.”

The ‘Listen To Your Lungs’ Lung Cancer Awareness  campaign was brought to you by the Marie Keating Foundation with the kind support of MSD and  Roche Products (Ireland) Limited.

The Marie Keating Foundation, in association with MSD Ireland, also hosted an event “Lung Cancer: Awareness, Stigma, Inequality” to highlight new research commissioned by the two organisations which shows a significant knowledge gap amongst the general public when it comes to lung cancer. Read key findings from the research by clicking here.