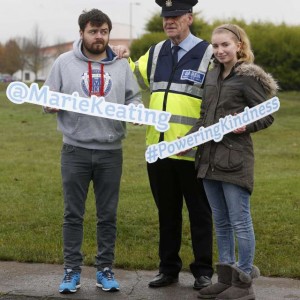 Dublin, Monday 19 January 2015: Today, Laurence Kinlan, who is better known as his Love/Hate alter ego ‘Elmo,’ called on Irish people to be kind in the name of the Marie Keating Foundation as he launched the charity’s bid to win this year’s Electric Ireland’s Powering Kindness campaign. Members of the public are being called on to do something kind or celebrate an act of kindness done for them and tell Powering Kindness about it on social media, tagging @mariekeating and using the #poweringkindness hashtag. Acts of kindness can also be registered on www.poweringkindness.ie during Electric Ireland’s Powering Kindness Week which takes place from 17 to 23 January 2015.

Kinlan said, “During Electric Ireland’s Powering Kindness Week, doing something kind or appreciating when someone is kind to you is even more rewarding than usual because you could help raise valuable funds for the Marie Keating Foundation. Most of us are broke in January so this is a really simple way to get behind a great cause. You can just make a cup of tea, or hold the door open for someone. So join in and help the Marie Keating Foundation win €60,000 from the Electric Ireland Powering Kindness fund.”

Kinlan is staring in a series of videos to promote Powering Kindness and the Marie Keating Foundation which will be released on the Foundation’s social media channels over the next seven days. Kinlan is joining other celebrities such as Piers Morgan, Irish footballer Shay Given, Imelda May, and X Factor star Sam Bailey in backing the Marie Keating Foundation in its effort to get Irish people to be kind in the name of the charity and help it win the funds from the Electric Ireland’s Powering Kindness fund.

Also speaking at the launch was Ronan Keating, who founded the Marie Keating Foundation along with his family in memory of his mother. He said, “I really hope everyone can do something kind over the next few days in the name of the Marie Keating Foundation. Irish people are known all over the world for their kind and charitable nature, so it’s a great campaign for the Foundation that everyone can get behind. By doing something small and so easy, together we can help families who are fighting cancer. Being kind doesn’t cost a cent but you could be changing the life of a family who feels completely hopeless right now.”

Liz Yeates, Director of Public Affairs, the Marie Keating Foundation, said, “Every cent that the Marie Keating Foundation wins from taking part in Powering Kindness will go towards our Comfort Fund, which gives grants to individuals and families that are struggling financially due to a cancer diagnosis. The grants make the world of difference to families who are literally going through the fight of their lives. Winning €60,000 could help us support up to 120 families in a meaningful way.”

Following the death of their mother Marie in 1998, the Keating family committed to provide people with the necessary information to prevent cancer or detect it at its earliest stages. Their collective aim was “to make cancer less frightening by enlightening.” Through national awareness campaigns and its Community Outreach Service, the Foundation’s nurses educate over 15,000 people each year in schools, workplaces and communities nationwide on all of the key cancers affecting men and women; their causes, risk factors and treatments. The Foundation also provides a range of cancer support services for survivors and their families.